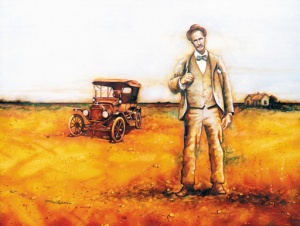 Homegrown is work that I developed in graduate school. My overall emphasis for my graduate thesis was in traditional illustration. I wanted to better understand water-based media, a topic that was ignored in my undergraduate studies. At that time, I was experimenting with a variety of new media – I was sick of acrylic, oil and color pencil which I worked with extensively as an undergrad. Also, I was working as a graphic designer and was spending forty to fifty hours a week on a computer. The last thing I wanted was to spend my off time in front of a computer doing digital work.

My major professor gave me the prompt to define myself through my art and design. Being from rural Kansas, I thought any trendy or urban type of work I developed would ring hollow and show my ignorance of the culture. Even though I had lived in Topeka and Kansas City (I know, they aren’t that big) and I was a major consumer of popular culture, I was far from knowledgeable or immersed in the urban lifestyle.

I had just begun working with antique imagery that my family had collected and preserved over the years. The image above, Bottom Dweller, was one of the first illustrations I developed from a couple of these old photographs. I illustrated it for a competition hosted by a large printing company in Wichita. It was selected for the month of August.

The success I had with this one image was the impetus for the larger body of work that I developed for my graduate thesis. This topic was something with which I had first or second-hand knowledge of and experience. Plus, it was pretty cool wading through all those old images and collecting stories as I visited with parents and grandparents.

Bottom Dweller is a gouache, pick-out technique with some airbrush added to kick up saturation overall. It is a composite of two separate images. The man standing is unidentified by the family, but the Model T was a relative’s car.